Top Posts
Win The New Astonish Cleaning Range
My Dream Spring Wardrobe
Where Is 2020 Going?
Spring Skincare and SkinShop Giveaway
Boots 70% Sale Haul
Why Does A Birthday Afternoon Tea Make The...
Highlights Of The Pandora Me Range Event
Hints For Preparing For Spring 2020
My Goals For 2020
A Year In The Life Of A Blogger
Home Review Just Dance Kids review – proving exercise can be FUN!!
Review 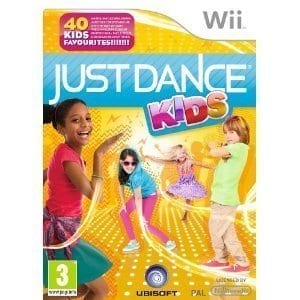 Before Christmas we were sent a copy of Just Dance Kids for the Wii to review. After living in a PlayStation 3 controlled house for quite some time it was nice to get back to playing on the Wii and feeling active again!

The Just Dance series has been recommended to me in the past and I was sure that I would enjoy playing with the game as much as Liv. Nothing could have prepared me for how active the dance routines actually are… the kids on the game CAN dance!! I was impressed with myself for keeping up with them and the fact that you attain points for mirroring the dance moves brings out my competitive streak! Mini Me is still of an age that she cannot fully grasp copying the moves however she thoroughly enjoyed herself jumping up and waving her arms alongside me!
With dance routines to songs such as Jingle Bells, Just The Way You Are (Bruno Mars), Song 2 (Blur) and Jump Up! (The Imagination Movers) it is very easy to find songs (out of the 30+ available) that will engage your child and have them jumping around the room. With an easy to use interface and intros to each song Mini Me was happy to use the control and scroll through until she found a song she recognised. The Just Dance Kids review proved a great success!
As opposed to other games in the range which feature avatars, Just Dance Kids features real children dancing to the routines which makes it slightly easier for children to relate to the game and follow the moves. There are several game modes (all allowing you to earn extra points! The Balloon mode was our favourite!) which prove to be great fun and before you know it an hour has past without you realising!! I was shocked when I checked the time and realised how long we had been playing, though we were on our feet dancing around the whole time!
This really is a great game that makes exercise fun for children! I wouldn’t put an age limit on the game as I enjoyed it just as much as Mini Me! With the ability to add up to 4 players on the Wii (PS3 and XBox 360 2 players max.) it is something the whole family can get involved with.
I have always loved the Wii due to the interaction required from players – I have never seen it as an actual games console, more of a fitness tool. Just Dance Kids is available on Wii, XBox 360 and Playstation 3 platforms (you do need the required motion sensors if not playing on the Wii!).
Full list of songs available… (the songs have been re-recorded by children!)

* We were sent a copy of Just Dance Kids for the purpose of this review however the thoughts and opinions expressed are entirely mine.

What To Expect From A Manchester Giants Birthday...