Top Posts
Highlights Of The Pandora Me Range Event
Hints For Preparing For Spring 2020
My Goals For 2020
A Year In The Life Of A Blogger
Christmas Food from Marks & Spencer
What’s On TV Christmas 2019
Tips On Travelling To Kenya
How Writing A Journal Can Lead To A...
What To Expect From A Manchester Giants Birthday...
Low Maintenance Interior Ideas For Your Home
Home Drumond Park Review: Pumpazing from Drumond Park
Drumond Park

There is no denying Liv loves toys, what child doesn’t… the fact that I love toys too is irrelevant! Liv does not have a particular favourite and I encourage her to play with everything she has. Though one particular toy has proved a marvel recently and great fun for adults also! 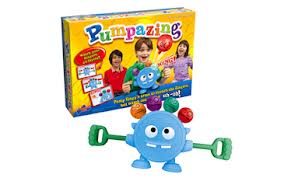 Pumpazing from one of our household favourites, Drumond Park is truly awesome! Something so simple has proved to be a lot of fun!

‘Zingy’ the blue character base with pump out arms, has 4 different coloured ‘Zingers’ that can pop out of his head at any particular time. Add in the included tokens, a couple of batteries and the game is on! This isn’t simply a case of pumping Zingy until all his Zingers pop out, this really is quite an addictive game, which can see you losing tokens if the buzzer happens to go off when you are pumping away.

It has been described as a pass-the-parcel type game and there is no description more fitting. As expected from Drumond Park, the game is colourful, wonderfully noisy and provides great entertainment, alongside being well made. Just make sure you replace the Zingers as soon as possible to avoid the scrabble around to find a missing piece! They easily slot into place with a click, are released with a whizz and the lever at the side can also release all the Zingers at the same time.

I actually found this game to be great for its comedy factor and also the fact it keeps kids active. The pumping action is more strenuous than you could imagine!

I have no doubt that Pumpazing will be a much loved toy in our house for a while now. If you are considering what gifts to buy for your children this Christmas, you will not be disappointed!

The Christmas Presents Are All Wrapped Up This Year!

Review: A Range of Amazing Books From Carlton Books