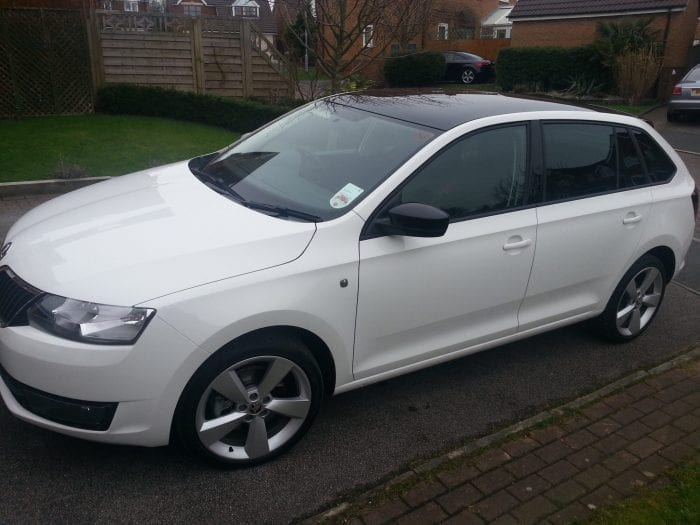 I’m always excited at the prospect of test driving a new car, so was thrilled when Skoda sent me a rather stunning Rapid Spaceback to put through its paces for the best part of 10 days.

When the keys landed in my hand I was in awe of the car they belonged to. Skoda really have come on leaps and bounds in the past few years and it’s quite easy to see why they win so many awards.

As the owner of a pretty cool car already it was always going to be hard to cope with the lesser engine size and BHP, especially as a girl racer. However in the end the 1.6 TDI 90PS Skoda Rapid Spaceback SE was a nippy car and had more bite than expected. 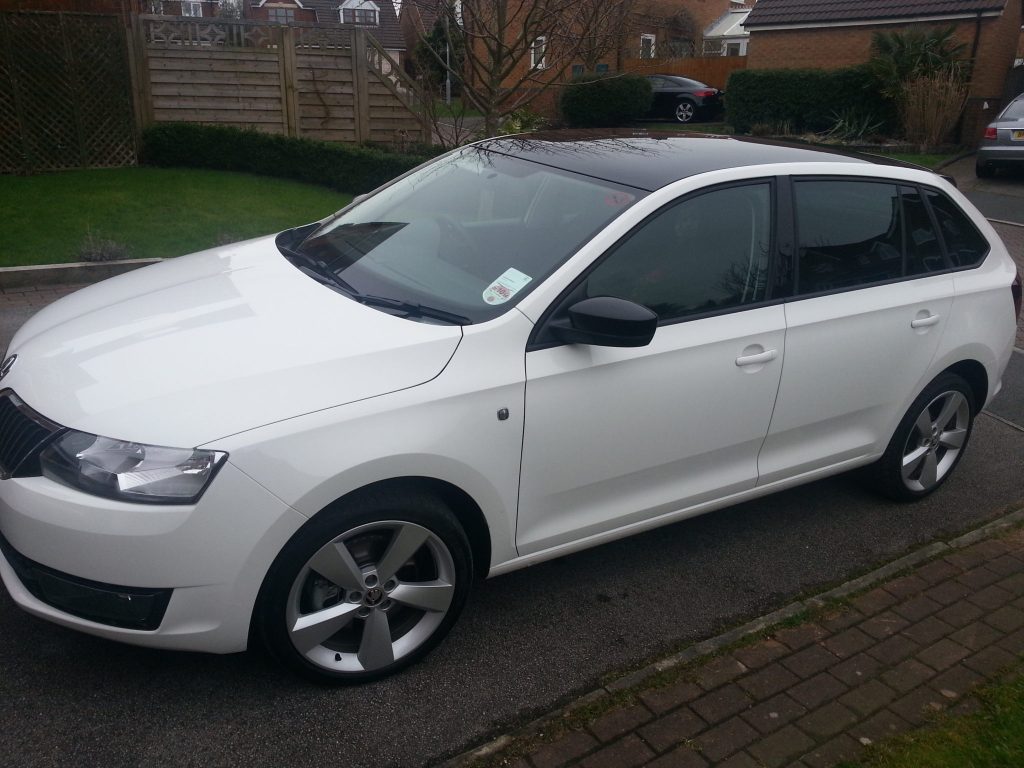 After a while I gave up comparing the Rapid Spaceback to my car and just enjoyed it for what it was. A rather fun to drive, classy looking hatchback that is deceptively spacious, offering a lot for the price, especially as a family car.

I am used to filling my car up every week, calling it a gas guzzler is an understatement so imagine my surprise when the Skoda Rapid Spaceback review survived a couple of school runs, trips around town and a 3 hour trip to Butlins in Skegness and the same back… and still had over a 1/4 of a tank remaining! I was astounded – I easily put 400 miles on the clock and the car could have carried on for much longer. Performance wise it is stated that the particular Rapid Spaceback model I drove had a combined mpg of 64.2mpg – I certainly had it at around the 60mpg mark when on the motorway. Town driving was certainly slightly less but I am heavy footed and ambitious with my driving. The max speed of 113mph was almost tested… sorry Skoda, the car is quicker than expected! 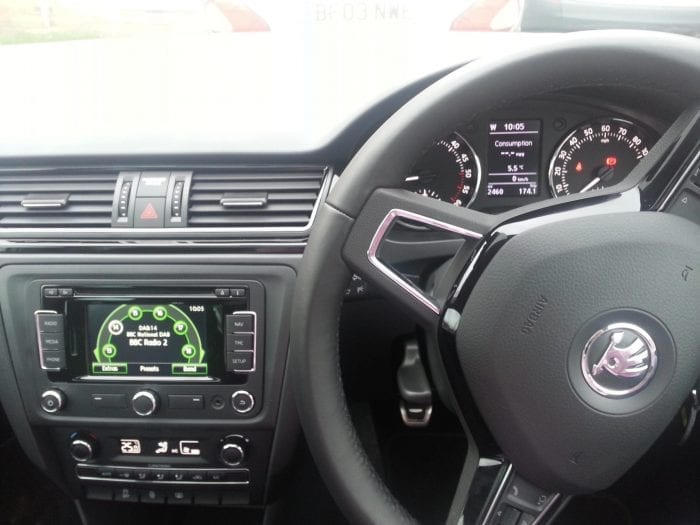 The On The Road price for the basic Skoda Rapid Spaceback 1.6 TDI 90PS is £17,280. It’s a lot of car for the money and unbelievably well made. My only gripe was the suspension, it was too hard for me – I am used to gliding over the speed humps on my estate but had to really slow down in the Skoda and brace myself. I am sure the suspension is something I would actually ignore over time, as previously mentioned, it was used as a comparison and is only a very trivial gripe.

The actual model I test drove was a sports model… even better!!! The optional extras fitted too the price up to £20,005 and included…

* Amundsen touchscreen satellite navigation with DAB digital radio (£550) – there were lots of radio stations pre-programmed which was awesome. The touchscreen navigation was great, though the radio could also be altered by the controls on the steering wheel. The Sat Nav was very easy to use and had me chuckling away as it exclaimed I would be on the M62 ‘for a long time’ – I too would state 64 miles meant I was travelling on that particular motorway for a long time! It updated quickly and I didn’t get lost once – the fact it easily navigated us around Skegness was a bonus was we would definitely have been lost without it. 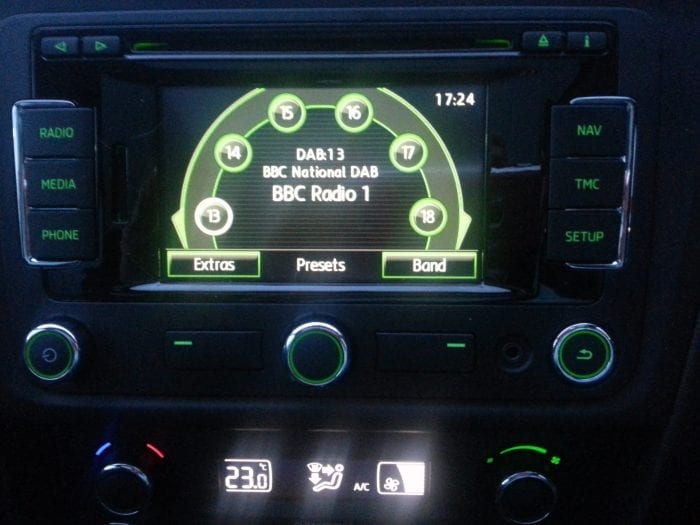 * Sport pack which included the Style pack (fixed panoramic glass roof, elongated tailgate glass, black rear spoiler, black door mirrors, black rear lights and black cornering front fog lights) plus sports seats (aka bucket seats), sunset glass, small leather pack and 17″ Camelot alloy wheels (£1,600) – personally I would say this optional extra is worth every penny! The panoramic glass roof was awesome – Liv who was stationed in the back of the car loved being able to see the sky as we were zooming along, especially when it rained.  The glass roof allowed so much light into the car and made it a joy to drive. 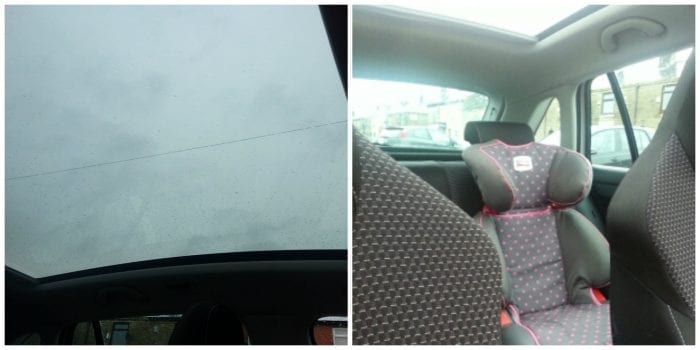 The Rapid Spaceback fits nicely between the Fabia and Octavia in the fleet range, it is a nice size, reminds me slightly of an A3, just a little bit longer due to the 415 litre boot. The boot was filled when we went to Butlins, I have never been described as a light packer! 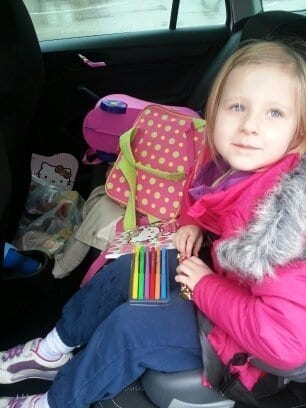 Being a Diesel confused me, especially with the lack of power I am used to from my 2.5litre 200bhp engine. However the handy information display on the dashboard indicated when I needed to change gear – very handy, though I don’t think it appreciated me dropping gears more often than it would like, but that’s my driving style.

The car handled nicely and gripped the road firmly, travelling over the country lanes near Skegness proved great fun. The steering wheel was chunky which I liked and the car was very responsive.

*Temporary steel spare wheel (£75) – fortunately I had no need to check on this!

*15 litre hot and cold box (£125) – fits nicely into the car and was positioned in the middle of the back seats and secured easily with the seatbelt. In all honesty I had to take this out as I really had not packed lightly at all and the back seat was covered in Liv’s junk… as you can see from the pictures! If you are a 3-4 member family this is a great addition for trips out to keep drinks cool, alongside picnic food. 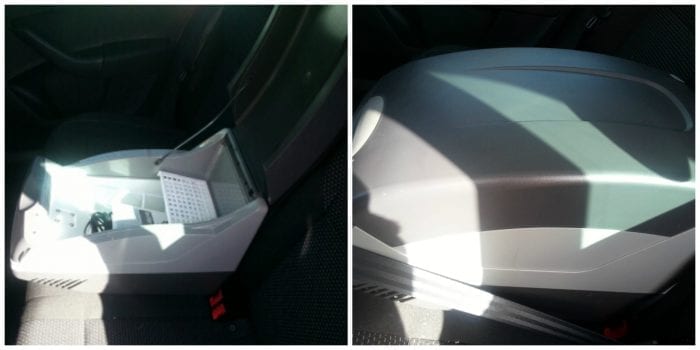 What are the Skoda Rapid Features

The speakers were awesome – 6 loudspeakers as included as standard- and Liv and I were able to rock along to some 80’s classics on the journey. I was a little concerned by how hot the cd’s were when taking them out of the stereo but put this down to the fact the CD drive was situated directly above the sat nav system.

I was devastated to find out the car had cruise control, which I never found, it would have been ridiculously handy on the journey, especially spending over 60 miles on the rather dull M62! The lane keep assist indicator was fairly good… it keeps the car stable in a lane if you decide you need to avert your eyes (or worryingly hands!) – which when you are lorry spotting comes in very useful!

All in all the car has the sporty look I personally look for, I would certainly plump for the optional extra of the Sport pack which includes the Style Pack (as described above). For Liv and I, this really would be an ideal car and is something I will consider when the time finally comes that I need to say goodbye to my beloved car.

Skoda, you have surprised me and I am definitely impressed!

*A tremendously, huge thank you to the wonderful Skoda Press Office who arranged for myself and Liv to travel around in style for the 10 days in which we took part in the Skoda Rapid Spaceback review. We certainly had a lot of admiring looks… well, the car did!* 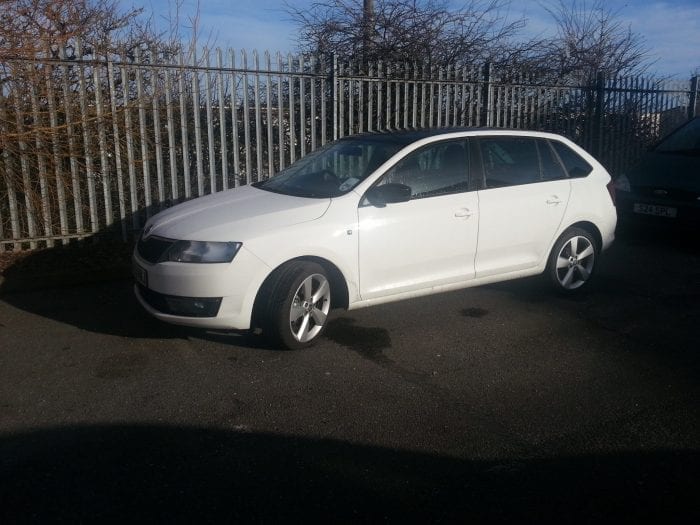 Making Slime Is Easy With The Nickelodeon Slime Station

Effectively Managing Your Expenses On Your First Car