What Is Britain’s Favourite Food?

We are right, slap bang in the middle of British Food Fortnight which runs from 20th September to 5th October. Possibly my favourite fortnight ever… I do quite like food.

Actually thinking about what foods I prefer is hard, especially as I love all food… Traditional British food (think meat and tatty pie), Italian, Chinese, Mexican, Indian… oh the list is endless and I love nothing more than trying new cuisines… so long as I do not have to cook them!

Travelzoo have been working with over 65 UK restaurants to pull together the very best British dining deals including a gourmet deal at London’s Savoy Hotel for less than £50 per person.  The full list of UK deals can be found here: http://www.travelzoo.com/uk/local-deals/gourmet-cuisine/London

To be honest, a gourmet meal at the Savoy sounds wonderful and actually would be a pretty awesome date. The only thing is the train fare down there would totally outstrip the really awesome deal. Shucks… will have to stick to Nandos!

To take a look at the perception of British cuisine abroad, Travelzoo’s teams of restaurant Deal Experts in the company’s 25 global offices reviewed the menus of so-called ‘British restaurants’ in their region and the findings were rather unexpected.  In addition to finding something called ‘shepherd’s pie egg roll’ in a restaurant near Travelzoo’s Chicago office, the teams also found the following weird and wonderful interpretations of British food:

Back on home soil, Indian restaurants were the second-most popular dining choice, followed by Italian and Chinese.  The survey also uncovered regional differences. For example, Brighton’s pizza and pasta lovers voted Italian their number-one choice, while Scots, Londoners and Mancunians plumped for an Indian curry over British cuisine.

In terms of frequency of dining out, 18-24-year-olds are the most avid restaurant-goers, with nearly 30% dining out several times a month, compared to 16% of those aged 45-54.  This age group are also the biggest fans of American food, with nearly a tenth claiming this as their all-time favourite type of cuisine.  Interestingly, of all adults polled, 18-24-year-olds are the least enamoured with British food – just 14% chose it as their favourite.

Putting my 5 favourite foods in order is like asking me to name my all time favourite tune… it simply cannot be done! Have you ever considered your favourite ever food? 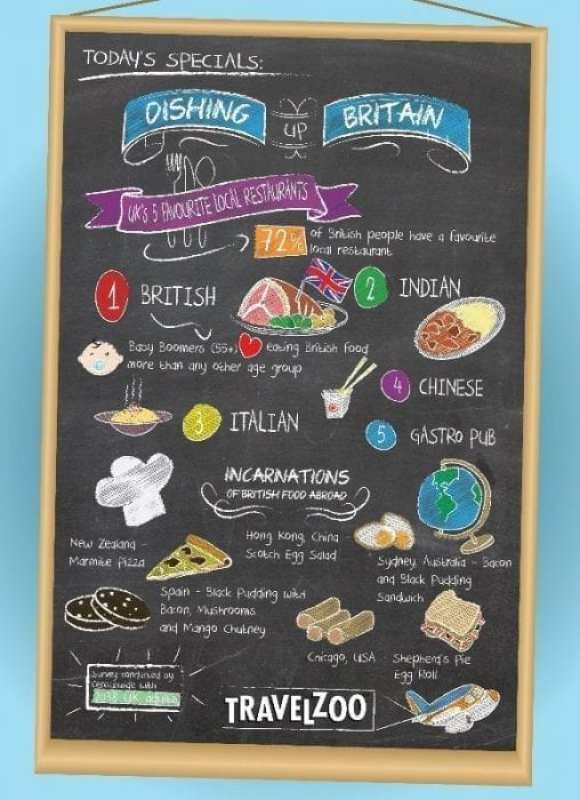 This infographic was created and sent to me by Travelzoo.