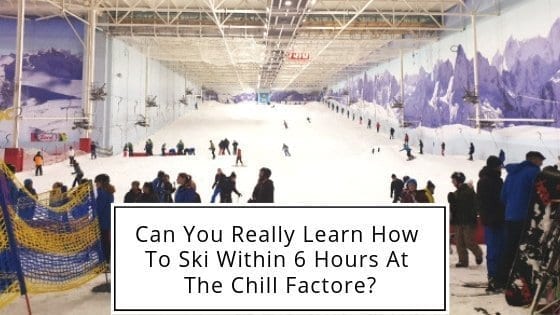 I dislike the snow very much.

Since moving into adulthood I have developed a fear of snow and falling over. Call me crazy, but I quite like my bones in one piece, thank you! Maybe this is the reason why by the age of 30-something, I had never been skiing… up until last week!

Can You Learn How To Ski Within 6 Hours At The Chill Factore?

The lovely people at the Chill Factore in Manchester had invited myself and Liv to test out their ‘Guaranteed to Ski within 6 hours’ programme and I was very reluctant, you can’t teach old dogs new tricks, can you?

The Chill Factore currently have an offer for beginner’s lessons priced from £89, if booked by 31st May 2019! Fresh includes an intensive day course or lessons split over 2 days or 3 weeks.

For us it came at the right time and knowing that our intensive lesson was from 2pm until 10pm (with two x 30 min breaks and an hour break for food which was included – trust me, pizza has never tasted so divine!), we bundled off along the M60 (Manchester’s version of the M25) on what was the warmest day of the year at that point… to spend 8 hours in minus 3 and 4 conditions. It was minus 3 upon arrival and minus 4 for our last hour! Question is though… Can you learn how to ski within 6 hours at the Chill Factore?!

The Chill Factore building is quite impressive upon approach, considering it is the UK’s longest, indoor, real snow ski slope, I guess it has to be! There are shops and restaurants inside, alongside the Play Factore indoor play centre, meaning a trip to the ‘Beyond’ centre will always be fun and take up a good few hours.

Top Tip: Make sure you arrive at least 45 mins to an hour before your lesson – to allow for parking, booking in and kitting up!

Booking in was super easy (make sure you book online and have your booking ref to hand!), we then moved onto the changing area to get kitted out!

You can hire clothing items from the Chill Factore – jacket and trouser hire is £8. Take your own gloves and thick socks, although you do have the opportunity to buy them there also. Wear thin clothes, because you are going to sweat like a kipper out on the slopes!
Next, you move round to the boots and skis kiosk – a handy machine tells you what size boots and ski’s you need. Make sure your boots fit well and are tight, but not to the point of crippling you like mine did. My toes still haven’t forgiven me!
Once ready, you should look like this… 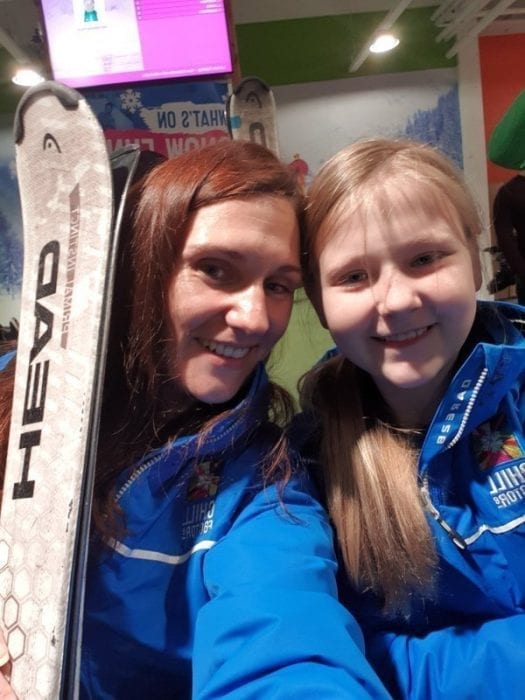 Lesson information was featured on screens near the boot and ski kiosk and when kitted out, patiently sat and waited for our instructor whilst checking out the people who would would get to know over the next 8 hours. You will go from complete strangers to feeling part of an epic team and will feel immensely proud of each member at the end! Everyone will have different reasons for being there – including Mike, who was heading off on a skiing holiday the next day! 😉 #lastminute

Our instructor for the day, George, had the patience of a Saint! He was seriously awesome and gave some fantastic 1 on 1 advice when watching us descend the slope(s) single file. Clearly we weren’t let loose on the main slope from the get-go, lessons are conducted on a smaller scale slope, that is no less daunting!

We progressed from walking around with alternating ski’s to walking sideways up the slope like a crab very quickly. Not realising that as time went on we were progressing further and further up the slope.

Walking sideways repeatedly is not fun, your legs will seriously ache, but it wasn’t just a way of us getting up the slope, it was an actual skill needed in skiing… trust me, we had learned it well by the time we moved onto the next stage of using the escalator!

Sitting down to a lovely lunch/dinner/ just food with the group was very much needed! Pizza has never been so tasty and was included with the lessons, alongside hot and cold drinks. Scrolling through footage that had already been taken in the previous 3 hour’s skiing, it was very evident that the whole group was progressing seriously well – without us even realising!

This video is a montage of recordings of Liv put together, from start to finish – showing her clear progression and the fact she took to it like a duck to water!

Children are fearless though and have a knack of picking up new ‘things’ with relative ease… for us older folk, it isn’t as easy and as mentioned at the top of the post, my fear of snow has escalated over the years!

The answer you all want to know is YES, I did learn to ski and despite George raising an eyebrow, he progressed me onto the ‘Improver’ Level (next level up), alongside Liv! Ha ha! So yes, you can teach an old dog new tricks and actually (and change their minds!), I walked away with a newfound fondness of skiing and a desire to return ASAP.

Alas, there is no video evidence of me on the slopes (praise be!), although a video of me being wiped out by a snowboarder would be hilarious viewing! I wasn’t as nervous as I expected to be and took to it with relative ease, staying upright was the easy part, actual turns not so easy. I had a habit of drifting to the left (to the left…) due to my right foot being my strongest.
I also had a habit of aiming at people – the slope could be completely empty, but I would still aim for the one object on it! 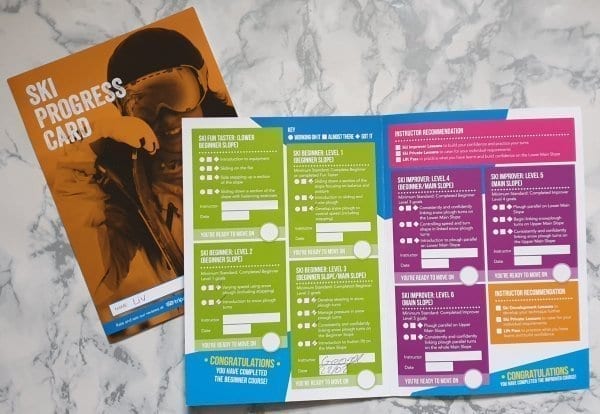 If I had to go in a straight line, I would be all over, if I needed to be all over, I would glide in a straight line… total ski rebel! 😉 Sorry George! Me being me, I couldn’t do the intensive day lesson without sound effects and talking to myself as I glided (sometimes gracefully) down the slopes. Everyone there was super lovely, from all the staff we encountered, to everyone skiing or snowboarding. There really is a sense of community and willing everyone on, both Liv and I walked out of the Chill Factore absolutely knackered, but in some respects, refreshed – we had just found something new that we both enjoyed and we agreed that we will return!

I’m not too sure if I will be rushing to book a ski holiday anytime soon, still very early days for that. However the Improver course would be the logical next step.

A huge thank you to the fabulous Chill Factore for curbing my fear of snow, for proving these old bones can ski and for putting a smile on Liv’s face. Incidentally… one of Liv’s nicknames is ‘Ski’, somewhat confusing on the day! 😉 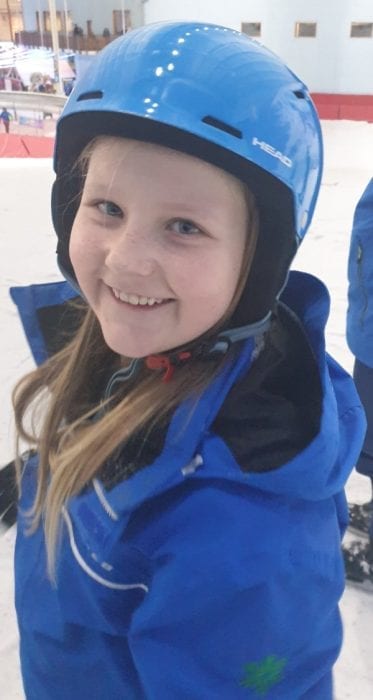 You will be knackered and bruised afterwards, I seemingly always fell on my left side as I was too conscious of my phone in my right pocket! However, I could not recommend the learn how to ski day course anymore than I already have to everyone this last week. If you are yet to attempting skiing, or even snowboarding, the Fresh offer of only £89 for the 6 hours of ski lessons is TOTALLY worth it. The answer to the question – Can You Learn How To Ski Within 6 Hours At The Chill Factore, is a very big YES!!!! With offers on the Snow Park at £20 per person or £75 for a family of four for activities booked and taken by the 5th May. There really is so much to do at the Chill Factore and so much fun to be had by all!

If I can be converted, anyone can – plus, we proved it’s perfect for any age… so what are you waiting for? 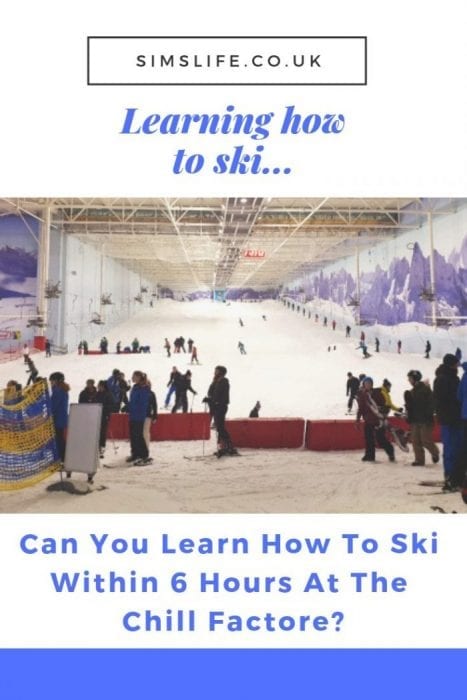 Our Lockdown Week Of Treats

What To Look Out For When Online Dating